Louis Hayet was a French neo-impressionist painter and colour theorist associated with Camille Pissarro, Georges Seurat and Paul Signac, three of the main players in the development of the neo-impressionist art movement.

In 2019 The Cleveland Museum of Art in Ohio acquired 'Banks of the Oise at Dawn', painted by Hayet in 1888. The work now hangs in Gallery 222 alongside paintings by Claude Monet, Vincent van Gogh and Paul Cezanne. Curator William Robinson said he considered the Hayet a premiere example of the artist’s work, and a major addition to the museum’s collection of early modern painting. We agree with Mr. Robinson also believing the Hayet worthy of display alongside the greats of the time. Hence this website's aim, to promote the works of the master neo-impressionist painter Louis Hayet. 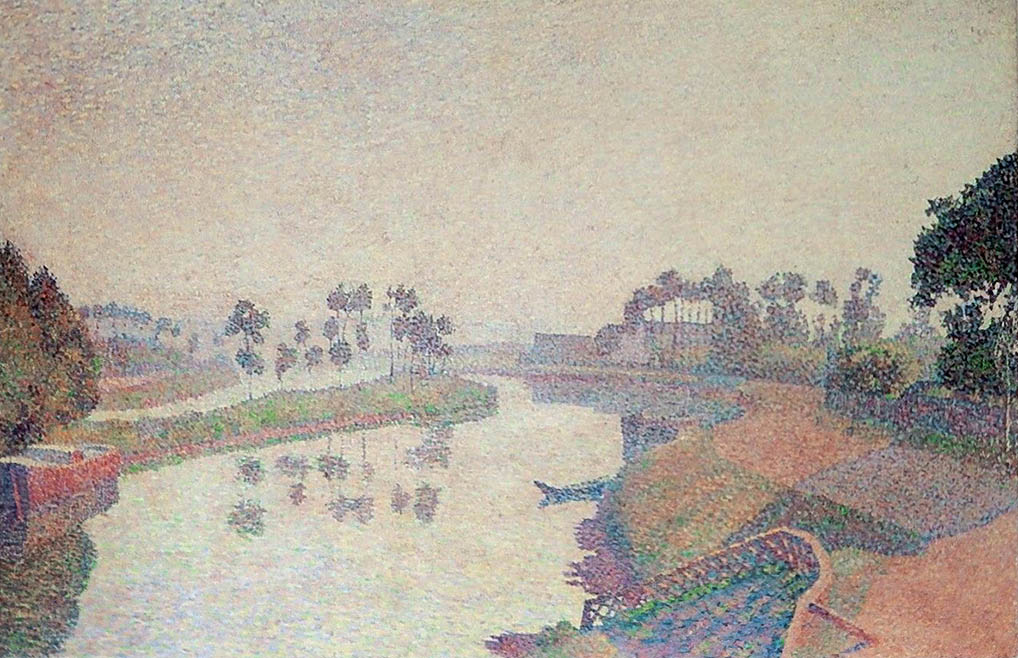 April 24th 2019: The Cleveland Museum of Art announced today it has acquired "Banks of the Oise at Dawn," 1888, by the French painter Louis Hayet. The first true Pointillist painting in the museum's collection, the work fills a major gap.

It took more than a century, but the Cleveland Museum of Art finally has an example of Pointillism, the late 19th-century style in which painters created images out of tiny strokes of pure color.

“It’s an incredibly beautiful object,” said William Robinson, the museum’s senior curator of modern European painting and sculpture. “It’s very subtle in colour, but luminous. You really have to see it to appreciate it.” 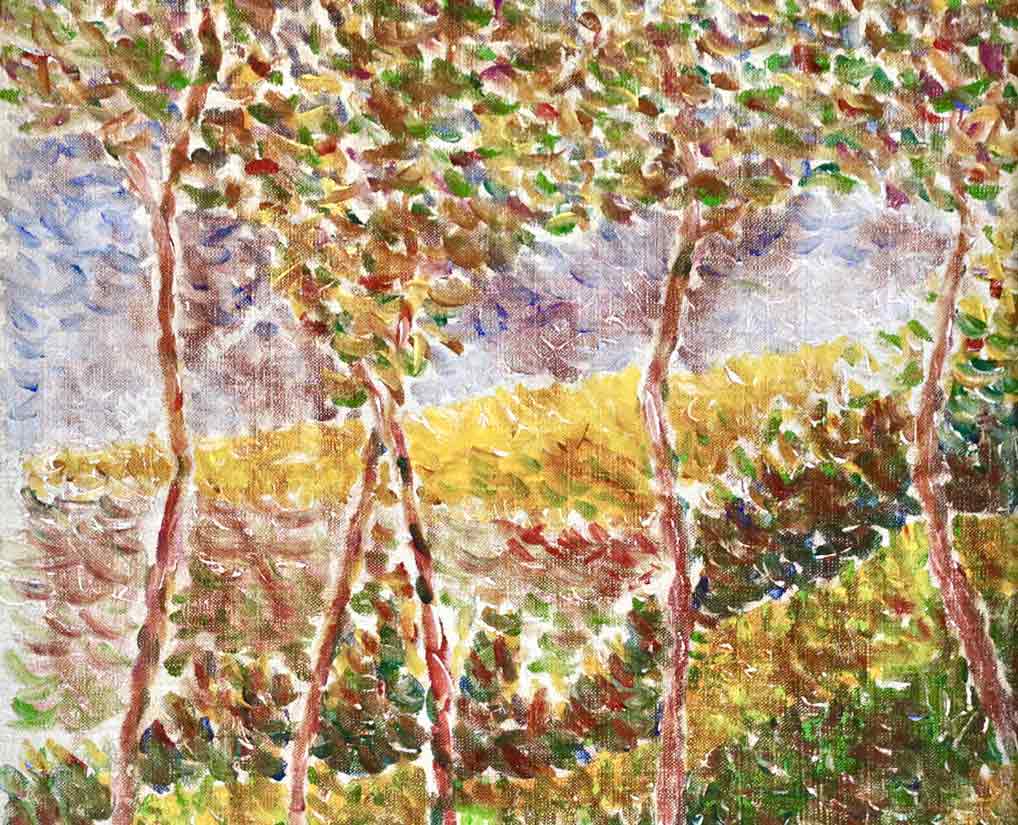 Before looking at the life of Louis Hayet, let us set the scene with neo-impressionism and its relationship to Hayet in the latter part of the nineteenth century. At the age of 24, Hayet became involved with neo-impressionism after seeing Georges Seurat's 1884 work 'A Sunday Afternoon on the Island of La Grande Jatte1’. Hayet was interested in the science behind the application of colour, experimenting with light, tone, colour and texture. His work in optics informed his neo-impressionistic technique.

Seurat theorized that individual spots of pure color would mix in the eye to produce vibrant tones. It was just two years after seeing Seurat's work that Hayet produced his master work, now owned by The Cleveland Museum. It is the application of the small dots of colour that gives the work its luminousity so keenly described by William Robinson.

Louis Hayet was born August 29th, 1864 in Pontoise, a northwestern suburb of Paris, France to Calixte and Léontine Hayet. Coming from a modest family, Hayet's childhood was somewhat unsettled and difficult due to the instability of his father - an amateur artist, and later, a travelling salesman. Hayet was shy and reserved as a child but showed artistic and academic abilities from the age of 12, producing watercolour paintings and drawings, but from 1877 to 1884 was to work with his father as a travelling salesman. 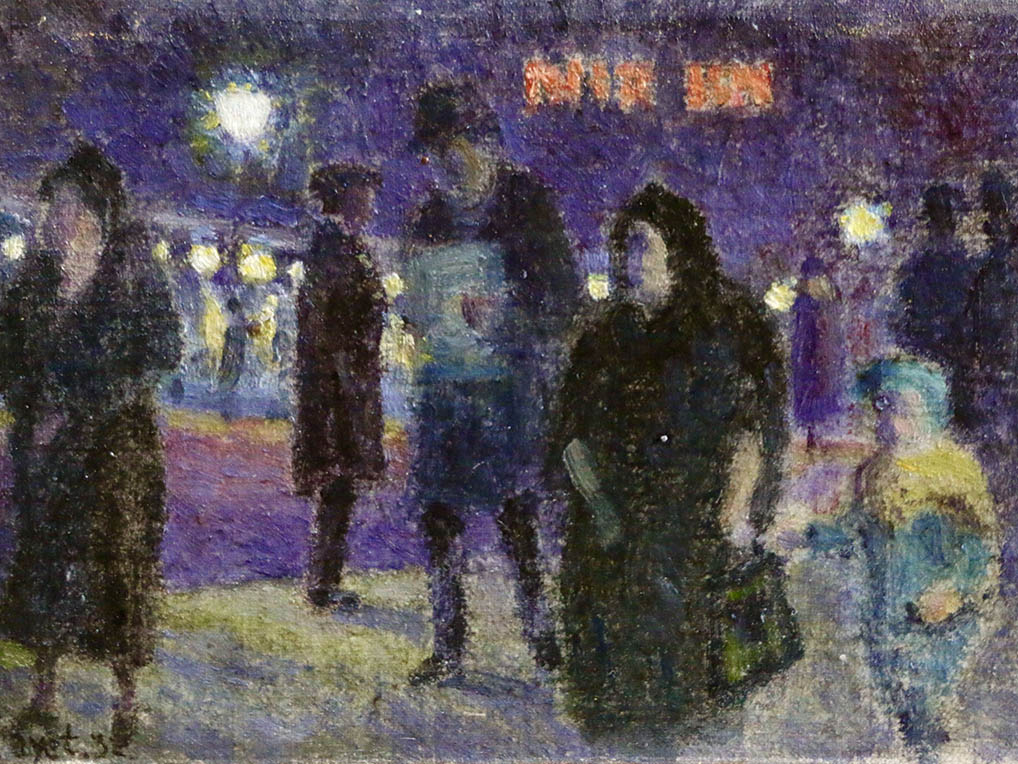 Hayet was mainly self-taught as an artist, although for a brief period, he studied at the École des Arts Décoratifs. Hayet met Camille Pissarro through his son, Lucien, whilst they were painting landscapes near Pontoise. Hayet presented some of his works to Camille Pissarro in 1883. Hayet set up a workshop in Montmartre on the Rue d'Orchampt in 1885. By this time, Hayet was proficient at drawing and painting and made a living in Paris undertaking various jobs, generally related to commercial art.

The friendship with Pissarro would prove highly beneficial. Hayet's relatively short-lived career as an artist in Paris was built on connections provided by Camille and Lucien, through them he was able to show his work to Seurat.

The artist maintained a close relationship with Lucien, Camille and Seurat. Hayet, influenced by Seurat, would often work en plein air, with a rapid, decided method which signalled a move from impressionism to neo-impressionism.

In early May 1886, Hayet and Lucien visited Seurat’s studio to view ‘A Sunday Afternoon on the Island of La Grande Jatte'. The work was to have a defining impact on Hayet. Shortly after, the painting was exhibited at the eighth (and last) Impressionist exhibition. Consequently Seurat was acknowledged as the leader of a new and rebellious form of impressionism which became known as neo-Impressionism. The term neo-impressionism was coined in 1886 by French art critic Félix Fénéon.

In 1887 Hayet moved to Paris and stated to paint according to the theories of colour laid down by Michel Eugène Chevreul2. In his early work, Hayet experimented with watercolors and encaustics (hot wax painting). 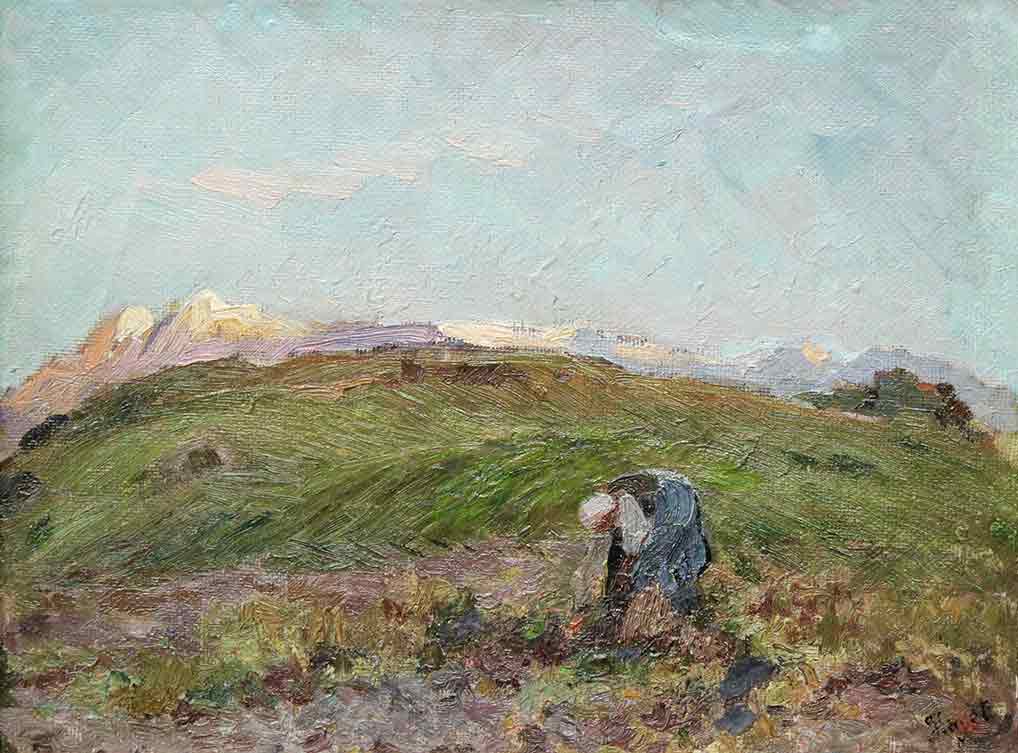 From 1887 to 1890 Hayet formed part of the neo-impressionist group championed by Paul Signac, Georges Seurat and Camille Pissarro. A large body of his finest works were produced at this time, including 'Bord de l'Oise à l'aube, Pontoise', a rare work for Hayet in its comparative large scale. Using the pointillist technique, Hayet is able to bring a luminescent quality to the painting, capturing the atmospheric and misty quality of the early morning.

A similar 1888 painting3 exists with the same title and on an equally large scale for the artist. Hayet remained 'true to colour' in the prolific and diverse body of work produced from his studios in La Frette and Montmartre. At this time, Hayet concentrated on painting cityscapes, landscapes and the circus & fun fair. A notable large 1888 neo-impressionist work 'Fête foraine la nuit, la parade' (Fair at Night, the Sideshow) was exhibited at New York's Metropolitan Museum of Art in 2017 as part of the 'Seurat’s Circus Sideshow' exhibition alongside Seurat's 'Parade de cirque' (Circus Sideshow). 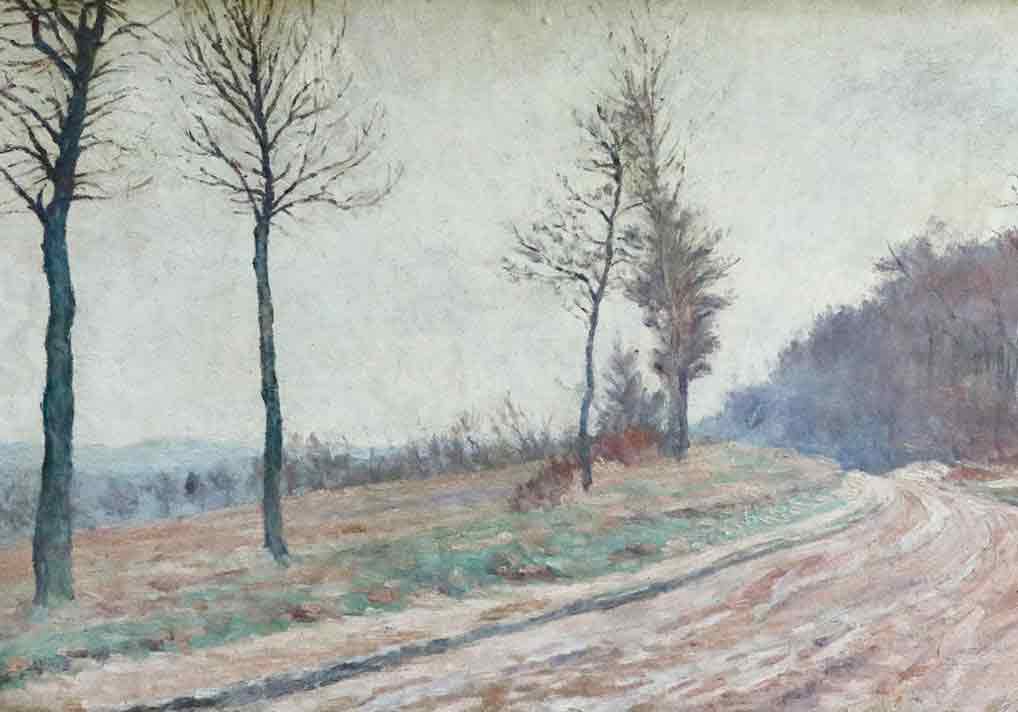 For one reason or another Hayet became troubled and started to languish over his art. Whether this was a personal issue or a broader problem with neo-impressionism and its advocates in general, it ended with Hayet resigning from the Indépendants and turning his back on divisionism, returning to a more classic impressionist style in 1890 whilst at his workshop in Montmartre at rue d'Orchampt.

His removal from Parisian artistic circles ultimately caused his fall into relative obscurity. Possibly as a result, Paul Signac removed mention of Louis Hayet from the second edition of his book 'Eugène Delacroix to neo-impressionism', alternatively known as 'The Manifesto of Pointillism'. This was likely a contributing factor to Hayet falling into obscurity as well as Hayet’s strong character and the fact that he rejected a number of salons and was forced to provide for his family. Works after this period still had a divisionist touch with staccato paint strokes.

Above: Detail from oil painting 'Paysage d'hiver' by Louis Hayet

In 1891 Hayet was one of the witnesses at the wedding of the artist Georges Tardif4 at the town hall of the 18th arrondissement of Paris. As well as Hayet's association with Camille and Lucien Pissaro, he met Georges Seurat and Paul Signac as well as the poet Paul Fort5. Hayet became involved in painting theatrical scenery for the Théâtre de l'Œuvre after meeting the theatre's founder, actor Lugné-Poë, while exhibiting at Le Barc de Boutteville6 towards the end of 1895. This arrangement was to last some 30 years. 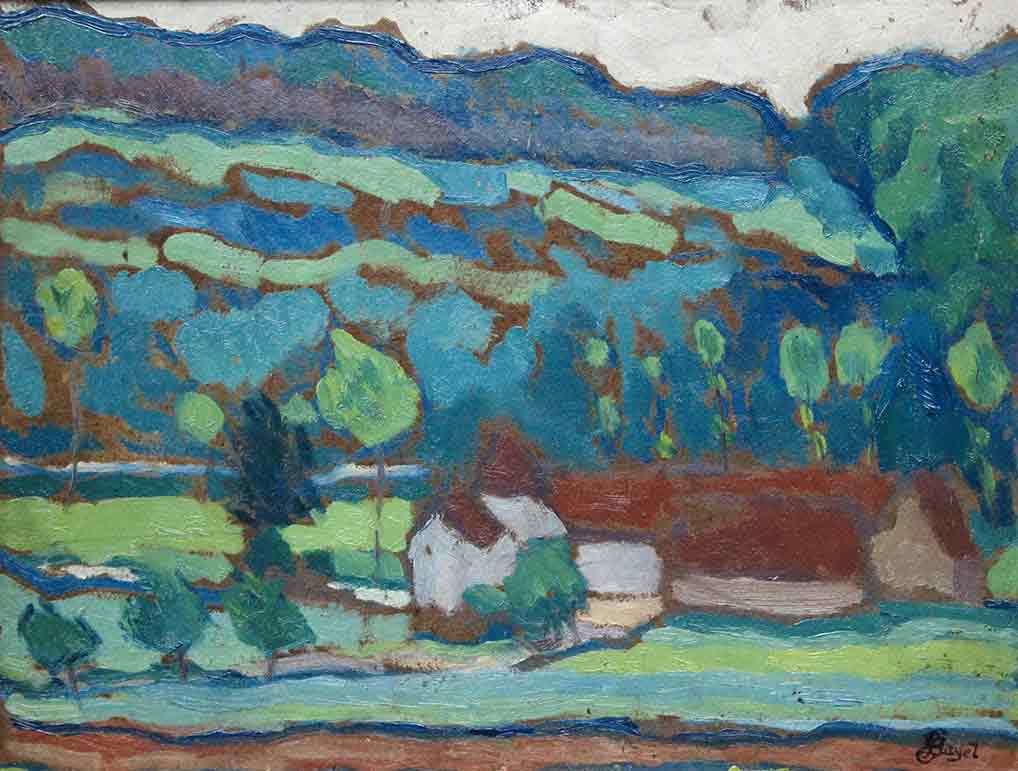 Between 1894 and 1897 Hayet was to participate in eight exhibitions at Le Barc de Boutteville. Hayet also designed theatre scenery for the village hall of Pontoise. Hayet didn’t exhibit until as late as 1889. Commercial work continued for the artist after a number of unsuccessful private exhibitions in the 1900s, after which Hayet concentrated on painting Paris scenes. After the First World War, Hayet focussed more on still-lifes.

After that time, he focused on painting scenes of Paris. After World War I, he concentrated on still-lifes. Up to 1911 Hayet held the post of 'Professor of ornamental design' at the École d'Alembert in Montévrain, having been hired by his cousin, a director of the school. Hayet also travelled to and painted in Algeria as well as designing a tripod with a triptych table in 1910 for which he won the Concours Lépine. Hayet was largely forgotten by the mid 1920s. 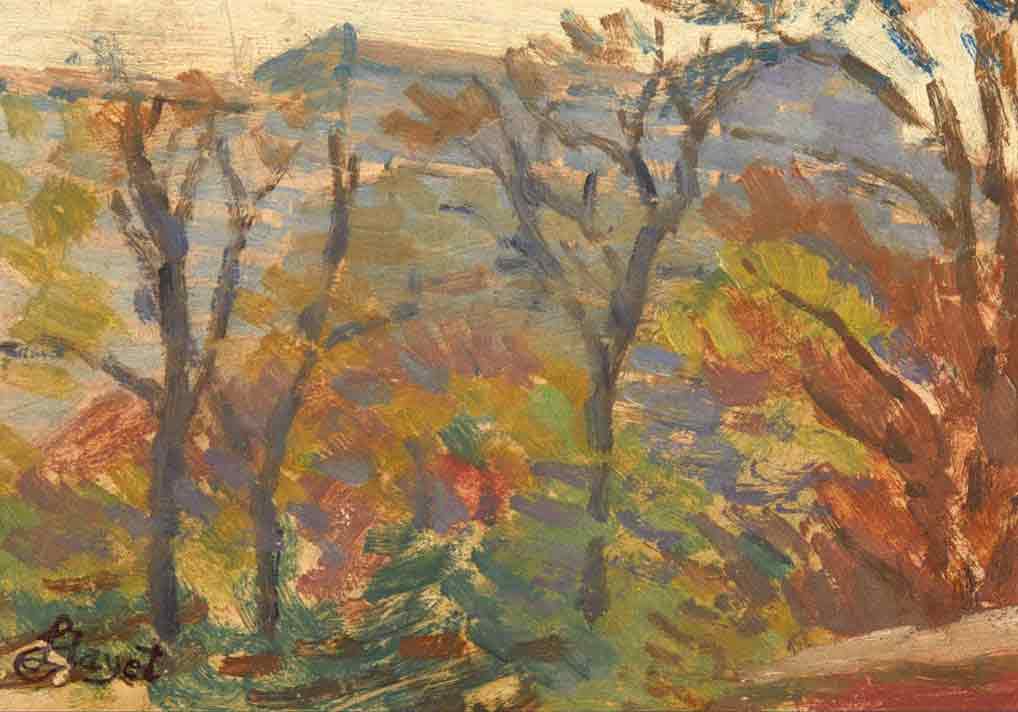 Hayet seldom exhibited and when he did it was to minimal acclaim. Hayet continued to travel and paint in Paris, Reims and Brittany whilst living in La Frette. After 1929 Hayet's artistic output declined and he dedicated more time to scientific research on pigment and colour, developing techniques and knowledge gained by his work on neo-impressionism. He wrote an essay on aesthetics and pictorial method and a semi-autobiographical philosophical tale, Kun the Fool (Kun l'Ahuri). Hayet hardly ever left his home in Cormeilles-en-Parisis through illness until his death on December 27th 1940.

In 2003 Hayet’s work featured in a collective thematic exhibition ‘Between Heaven and Earth: Camille Pissarro and the Painters of the Oise Valley’. The ‘Collège Louis Hayet’ at 4 Avenue Louis Hayet, Cormeilles-en-Parisis (Val-d'Oise) is named in his honour.

According to Hayet’s biographer, John Sutter, it is believed that the artist’s body of work extends to between four to five hundred paintings and three hundred to three hundred and fifty drawings, watercolours, gouaches and pastels. Sutter was an avid collector of Hayet's works and one will sometimes find Sutter's a red collectors stamp on the back of works.

A reference catalogue of Louis Hayet’s works was written by Guy Dulon and Christophe Duvivier (Director of the Museum at Pontoise). Duvivier decalares boldly that Hayet’s works show a sense of abstraction and closer to the evolution of Van Gogh. Hayet’s divided brush strokes in oranges and blues during his productive neo-impressionist years certainly remind one of Van Gogh’s works.

It is remarkable that Hayet didn’t reach the heights of his contemporaries as his neo-impressionist works were bang on period and his contribution to the movement and quality of his work is unquestionable. With institutions such as The Cleveland Museum of Art fighting for Hayet's corner it must just be a matter of time before the public understands the importance of Louis Hayet7 in the art world.

1'A Sunday Afternoon on the Island of La Grande Jatte' is Georges Seurat's most famous work and probably the most well known pointillist work ever produced by the neo-impressionists. The work is painted on a grand scale at approximately 2 x 3 metres - much larger than anything produced by Louis Hayet, who would generally work on a small scale.
2Michel Eugène Chevreul (1786 – 1889) was a pioneering French chemist who studied the scientific properties of colour in natural substances, particularly in relation to the manufacture of dyes. He was a director of the dyeing works at the Gobelins tapestry manufactory in Paris. Chevreul wrote a book called 'The principles of harmony and contrast of colours and their application to the arts by M. E. Chevreul', often referred to as 'Chevreul on Colour'.
3Exhibited: Pontoise, Musée Tavet, Louis Hayet, oeuvres néo-impressionnistes de 1885 à 1895, 1991. Bibliography: Guy Dulon & Christophe Duvivier, Louis Hayet: peintre et théoricien du néo-impressionnisme, Pontoise, 1991, illustrated in colour page 139.

4Georges Tardif (1864 – 1933) was a French artist. He attended the École des Arts Décoratifs in 1880. It was here that Tardif may have met Hayet.
5Paul Fort (1872 – 1960) was a French poet connected with the Symbolist movement. He founded the Théâtre d'Art as a reaction against the Naturalistic theatre and published an extensive body of work.
6Le Barc de Boutteville was a Paris art gallery which welcomed young artists to exhibit in the 1890s. At this time the gallery focussed on impressionist painters. Hayet's fellow neo-impressionist, Paul Signac, exhibited at the 'Peintres Impressionnistes et Symbolistes, Premier expostion' in late 1892/early 1893. Other notable exhibitors include Pierre Bonnard, Toulouse-Lautrec and Paul Gauguin.
7There are Louis Hayet paintings for sale in th Vintage Arts shop.